DETERMINATION OF MOULD COUNT, DIVERSITY, THE EFFECT OF STORAGE AND DOMINANT MOULD STRAINS IN RAISIN SAMPLES

Three different media which are Dichloran %18 Glycerol Agar (DG18), Dichloran Rose Bengal Chloramphenicol Agar (DRBC) and Malt Extract Agar (MEA) were used for mould count in 66 raisin samples obtained from İzmir and Salihli, Akhisar, Sarıgöl, Alaşehir which are district of Manisa region, and all results showed that three different media were not statistically different from each other (P>0.05). DG18 was accepted as counting media in this research becuse of selectivity, colony morphology and differentiate cultural characteristics. At the end of these analyses, none of the raisin samples were contain yeast cells so (<10 cfu/g), all microbial counts are presented as mould counts in the raisin samples. The aim of the present study was to determine the diversity, occurrence, and distribution of mould species and to determine the dominant mould strain in raisin samples. Additionally, the dominant mould strain was isolated from 26 raisin samples and it was called as Aspergillus niger Tiegh kuru üzüm Ege. In addition, it was determined that the mould count decreased to <104 cfu/g level at the end of the 4 weeks (average value of 8 weeks; 4.33±1.95) storage period in raisin samples stored at room temperature. 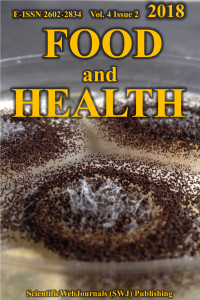